I am pleased to announce that my landscape photography website is now located at http://www.edinburghphotography.com! Onwards and upwards hopefully! 🙂

I have a new website, please take a look!

Thanks for your time! 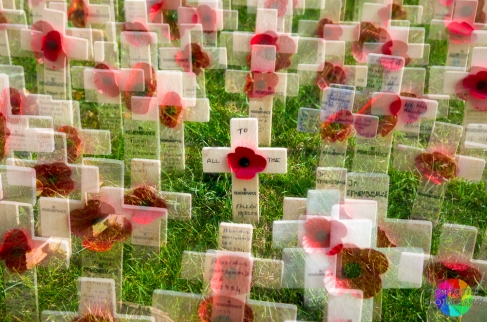 They went with songs to the battle, they were young.
Straight of limb, true of eyes, steady and aglow.
They were staunch to the end against odds uncounted,
They fell with their faces to the foe.

They shall grow not old, as we that are left grow old:
Age shall not weary them, nor the years condemn.
At the going down of the sun and in the morning,
We will remember them.
—

This photo is composed of 2 shots:
– A standard short exposure
– A longer exposure combined with zooming while shutter open
Then I blended them in Photoshop and used a layer mask to omit the central area of the longer exposure to ensure the subject was sharp. Seems to have turned out reasonably well. Any thoughts?

Calton Hill (Edinburgh) is full of great photo opportunities and looks great any time of day. I’ve taken quite a few photos there in the evening and got some nice sunsets but it occurred to me that I had never been there at sunrise before.

I set out at 7:15am today to remedy this and got to Calton Hill just before 8:00am (a few minutes before sunrise). It was actually a while later though before I actually saw much light as the Salisbury Crags do a good job of shielding Calton Hill from the early light.

There is of course the classic shot from Calton Hill looking towards Edinburgh castle but I was focusing in the other direction this time. I started out looking at the National Monument. In my opinion it makes a nice photo at any time of day. It was just starting to get light when I took this one:

I quite liked this silhouette but I felt that the Monument still had more to offer as the light developed. However, my fingers were rapidly losing all sensation in the biting cold and so I felt I would come back later, after seeing what else I could find.

I went round the back of the monument and the light was just beginning to stream through the trees. I didn’t want to miss this one!

The sun was this point nearly appearing above the top of the Crags and so I headed to the Eastern side of the Crags to look out at Arthur’s Seat, Holyrood Palace and the Parliament. This one turned out better than I was expecting actually because the sun was dazzling and I found it difficult to be entirely sure the photo was composed properly! I think the Autumn leaves compliment the colours of the sunrise quite nicely.

I decided to head back to the monument as things were rapidly brightening up now. I unfortunately got there just as a coach full of tourists arrived and they prevented me getting a clean photo for a while. I feel it was worth the wait though, I really like the colours and the shadows of the columns on the grass.

Deciding that I had pretty much reached the limit of my ability to endure the cold, I decided to head home. I couldn’t resist getting a picture of the Duke of Wellington statue at the end of North Bridge however. A quick hop over a gate rewarded me with a picture from a slightly different angle, looking up the Bridges from behind the statue. 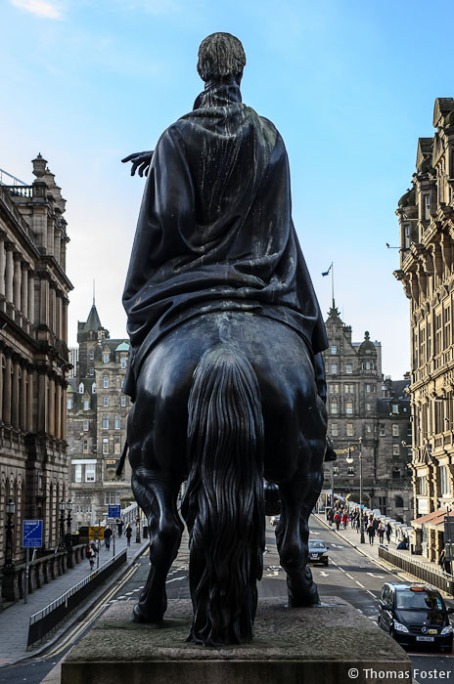 What do you think? I was originally planning on heading down towards Leith for a few more photos but decided to leave that for another day. Hopefully the clear skies will hold out, or maybe some dramatic clouds/fog would be nice!

The zoo is a great place for animal photography (well…some of the time), I would never have a chance to photograph penguins otherwise, at least not in the near future! It doesn’t even have to be obvious that it is an animal in captivity, courtesy of depth of field and careful composition.

I was quite happy with this picture (and in fact have it printed and on my wall now), I’m half debating whether it matters that the beak is out of focus or not. I think it would have been harder to isolate from the background and the picture would have been less effective with a smaller aperture (i.e. higher f stop). At any rate, the eyes are in focus and that’s what I would be more interested in!

This was taken with my D3000 a while back and unfortunately last time when I visited the zoo (with D7000), the penguins were not in Edinburgh zoo as their enclosure was being cleaned or renovated (not sure which) so I couldn’t try to improve upon my penguin photography! There’s always next time!

This one is taken from the top of Scott’s monument, a great place to get a unique view of Princes Street. Unfortunately I don’t own a tilt-shift lens so it’s only a digital miniature effect, I think it turned out quite well though (and was featured on Flickr’s ‘Explore’ page at one point). 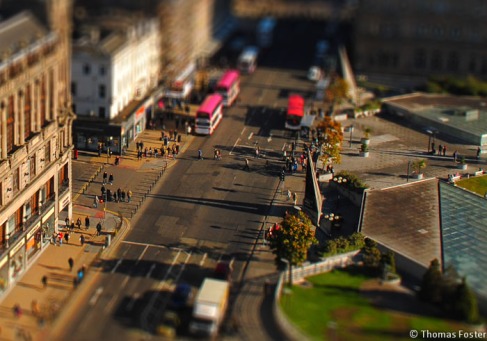 RAW vs JPEG (a practical comparison)

I know that this is one of those contentious topics so I appreciate some won’t agree with me! I used to shoot JPEG, since trying RAW out one day I have never gone back and have taken thousands of photos in RAW since. It has many benefits in my eyes, especially if you want more flexibility in editing the image afterwards or the image is tricky to capture in some way (perhaps due to range of exposure).
For example in the image below (which is the Chinesischer Turm in the Englischer Garten in Munich), the sky is overexposed and initially the image is reasonably bland.

However, you can see that there is still some detail there. I took this in RAW+JPEG to make a comparison. I went into Lightroom and reduced the highlights, increased blue saturation and decreased blue luminosity (equally) for both the RAW and JPEG files. I ended up with the following two images (click for full size):

The sky is looking much more interesting now and both images look reasonably similar, although I feel that the colours on the RAW image are nicer (the JPEG looks a bit washed out to me).
However if you look at a 100% crop of pretty much any area, you can easily see a difference (again best clicking for a full size comparison):

Besides the difference in the colour, the JPEG crop shows much more obvious banding in the sky (particularly on the bottom right of this crop), the clouds also look very poor in comparison to the RAW crop. I also noticed artefacts around the sky/tower boundary on the JPEG crop and these were not present on the RAW crop.

If JPEG works for you, fine, it’s just that there is no real reason not to shoot RAW. There is additional detail in the images which is great for digital manipulation of images (which is obviously a large part of modern digital photography) and handy if an area is under or overexposed.

Of course file size might be an issue as here the RAW file is around 2 times the size of the JPEG (this will vary). However, with storage space being so cheap nowadays, this shouldn’t be too much of a stumbling block. If you don’t already shoot RAW then I would seriously recommend at least trying it out to see how you get on!

What do you think? Do you shoot RAW or JPEG? Something I didn’t cover here was 14bit vs 12 bit RAW…do you think the 14bit makes a difference?

Looking over to Edinburgh Castle from Calton Hill

Another one of those cliched views and another 3 image HDR, taken in early 2012 (snow is still visible on the Pentland Hills in the background). I think this one turned out quite nicely, I have taken a photo from here before and it was featured on the front cover of the Edinburgh University newspaper but I felt like I wanted to improve upon it and I feel this one turned out reasonably well. I’m not always a big fan of HDR, I think it is fine when it isn’t too extreme though (you know the type of picture I mean!)! 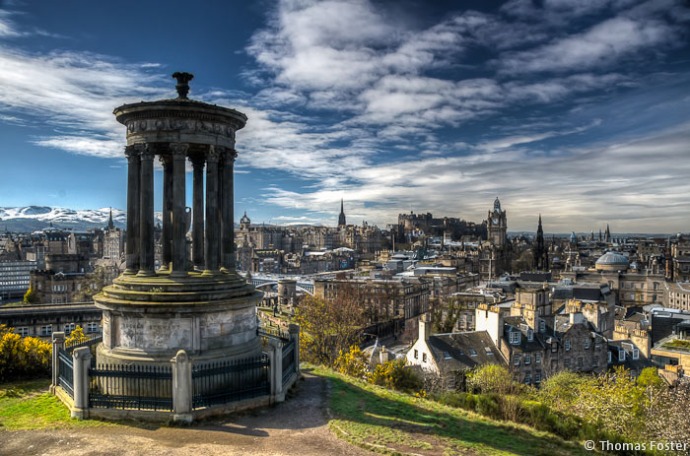 Brilliant sea and sky on the West Coast near Connel Bridge

This one is from a couple of years ago too (Summer 2010). The weather was wonderful and the flat waters created great reflections. A beautiful area of Scotland, just north of Oban and at the outlet of (the very photogenic) Glen Etive.

Winter panorama of the Meadows, Edinburgh

This is a large panorama (7% full size here) , made up of 14 individual shots. I took this the winter of 2010/2011, I remember looking to my right and saw this huge, impressive, developing cloud formation and being thankful I had my camera! Out of the photos I have taken so far, I think this is still one of my favourites!